POND PROJECT STARTED  SEPTEMBER 2009 -
CLICK OVER THE PICTURES TO ENLARGE THEM!

September 2013 - and we are still not completely finished!!

Pictures by Andy description by Martine!

When we moved house in 2009 we needed to build a pond to house our old collection of Koi so we started digging in the first week we moved with the help of our old neighbour who owns a construction company - this picture shows the start of the dig! (click over the pics to enlarge). 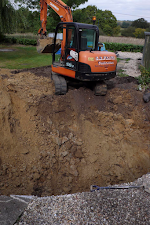 The scale of this pic shows that the pond was going to be deep!  Second day shows an appox depth of 8ft - 1ft for the concrete base and an overall depth of 7ft when finished.

A polythene liner on the base ready for the next layer of metal grid to make the base stronger before the concrete arrived.

The grid in place and ready for the concrete.

Concrete being poured into the base over the metal grid.

Blocks being delivered to the base of the pond ready for the brickies to start laying the outer wall of the pond.

Walls built and the bottom drains in position ready for the final layer of concrete.

Concrete poured in to the top level of the bottom drains.

Soak away dug and 3 concrete cylinders placed on top of each other. The hole is about 3m deep and will be used to discharge the filters dirty water when they are installed.  This was needed as we do not have a mains drain system to discharge the water to. 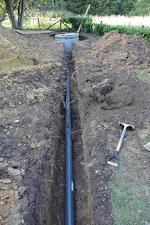 Drain connecting the pond to the soak away.  This needs to be situated a distance away from the pond so that it can drain the water away without it seeping into the ground surrounding the pond.

Skimmer in place on the wall of the pond - this will skim off any surface matter into a basket.  As we have lots of trees around us as well as the Willow over the pond, as soon as autumn comes the leaves will fall into the pond and sink to the bottom where it is possible that they could block up the pumps causing them to fail or block the filters which would need to be cleaned out more often.

We love the sound of running water so we are having a waterfall built at the bottom end of the pond so that we can see and hear it from the house and the decking area in the summer.  There are three stages for the water to run over so it will also contribute to the oxygenation of the water.

Completed waterfall just needs to be rendered and a couple of slates put on the shelves for the water to run over. The slates will need to be leveled so that the water runs over them evenly. Whilst all the work was being done the fish which we had brought with us from our old house were kept in the round blue swimming pool seen in the background of this picture  - we used a Nexus as a temporary filter.

Pond being rendered ready for fibreglassing over.  You can see the oulets in the side of the wall so that the circulated water runs back into the pond at an angle, creating a current going around the pond in a circular motion so that any debris is concentrated in the centre of the pond and extracted by the bottom drains.

Starting the fibreglassing! The surface is primed with resin and left until sticky and then the sheets of fibreglass are laid starting around the lip at the top and working round.  All the exposed fittings and pipework are sandpapered and coated with etching fluid so that the fibreglass has a rough surface to bond with and create a watertight edge.

Working around the top of the pond first and then the sides and base will be started on.

Fibreglassing finished and completely dry but before the final gel surface coat is applied the whole of the fibreglass surface must be sandpapered to remove any little spikes of fibreglass formed.  There are various colours of gel coat to use but we chose black so that the colours of the fish will really show up and it tends to look more natural then blue!

The pond now completely fibreglassed!  Now for the landscaping and filling up!

Andy went down to Landers Quarry and chose some pretty hefty slabs of stone to go around the top lip of the pond - every piece was chosen individually to suit the style he had in mind with most of the stone on the ledge but a small amount hanging over the edge of the pond. Luckily our friend Brian Reed owns a lorry with a crane on the back so we could individually position the slabs in place.  The far side was a bit of a bigger problem as the crane at full stretch would not reach!  This was solved using small sections of scaffold pole onto which the slabs were placed, as near to the spot as we could, and then rolled round the ledge like the Pyramid stones were!  There were a couple of near misses when the slabs slipped in the jaws of the crane and one averted mishap on rolling the slabs but all in all not a bad job all round!

Showing most of the stone in place around the pond - the spaces in between were to be filled with aquatic plants and reeds.

Showing the stone at the back of the house nearest to the decking - Andy has started to landscape and position some of our statues around the pond!